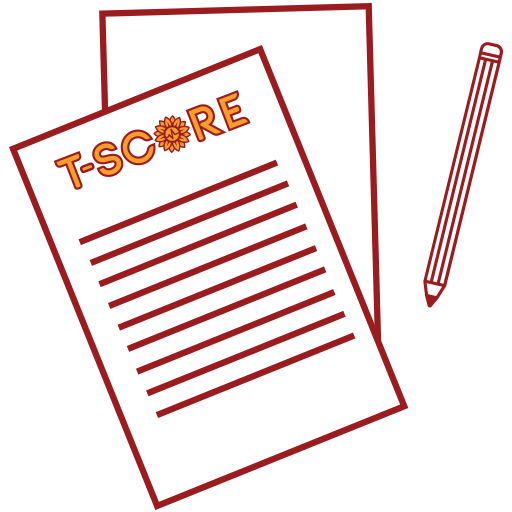 What is T Score? 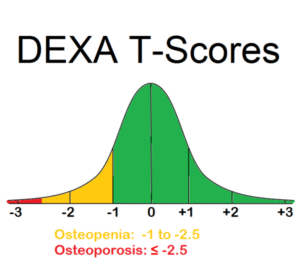 The T-score on your bone density report shows how much your bone mass differs from the bone mass of an average healthy 30 year old adult. A bone density test is like any other medical test or measurement. The results for the entire population will be distributed around an average score (the mean). A T-score is a standard deviation — a mathematical term that calculates how much a result varies from the average or mean. The score that you receive from your bone density (BMD or DXA) test is measured as a standard deviation from the mean. The manufacturers of the DXA machines have programmed them to use a formula to compute these values.

Osteoporosis was defined by the World Health Organization in 1994 as a T-score that is 25% lower than the average 30 year old or 21/2 standard deviations below the mean or a T-SCORE LOWER THAN -2.5.

Some people have low bone density. You may hear this called osteopenia. Osteopenia is defined by the World Health Organization (WHO) as 10% to 25% below an average healthy 30 year old adult, or a T-score between —1.0 and —2.5 standard deviations below normal. Having a T-score between -1.0 and -2.5 is not “pre-osteoporosis” or a medical condition, but it is very important for people with low bone density to develop a good plan to prevent bone loss and osteoporosis. 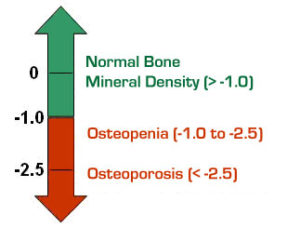 NOTE: Any post menopausal woman should always request her T-score.

A Z-score is helpful in diagnosing secondary osteoporosis and is always used for children, young adults, women who are pre menopausal and men under age 50. If you have a very low Z-score (more than 2 standard deviations below other individuals your age), your doctor should consider whether other medical conditions or medications may be causing lower than expected bone density.